2022's getting it 'big time as Big Time Rush makes a comeback tour on the 'Forever Tour', with a special stop at Bank of NH Pavilion on Saturday, June 25, 2022. The boys behind the Nickelodeon-favorite hit tracks "Big Time Rush (Theme)", "Windows Down", and "Boyfriend", just released their latest single "Not Giving You Up", after making their much-awaited comeback with last year's “Call It Like I See It”, their first release since 2013. BTR marked a special place in fans' hearts all over the world, growing up seeing the boys' antics in their hit show, and performing fan-favorite bops. Don't miss out on a night to relive your youth with Big Time Rush's big comeback live on stage on the Forever Tour. Book your tickets now! 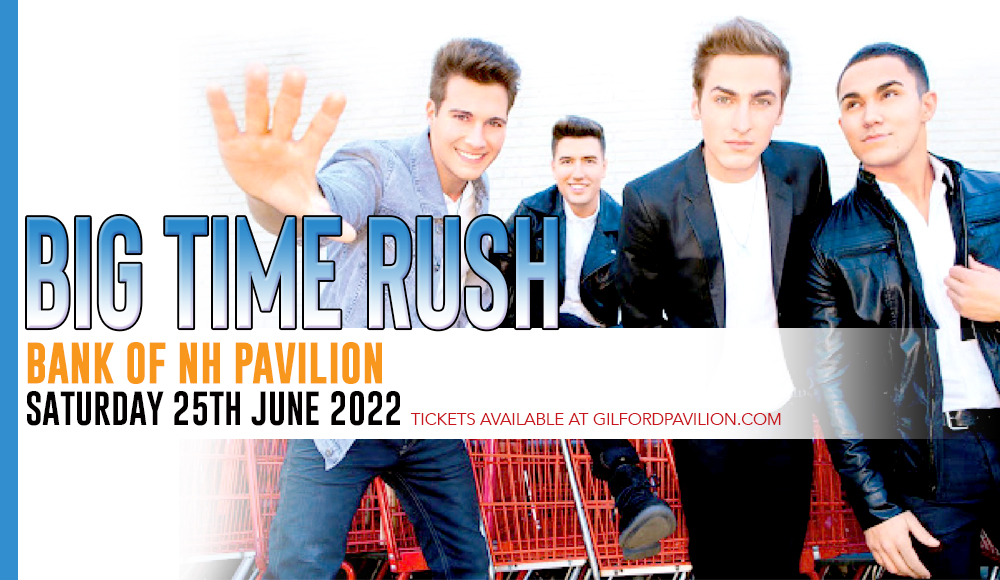 Does 'forever really exist? Turns out it could, as the band from the hit show, Big Time Rush, that ran through 2009 through 2014, made a big surprise comeback by wishing their fans well on a virtual meeting at the onset of the global pandemic. By December of 2020, they released a YouTube video performing their song "Beautiful Christmas".

The boys behind the band that won hearts all over the world are Kendall Schmidt, James Maslow, Logan Henderson, and Carlos PenaVega. They are the voices behind the Nickelodeon childhood hit singles and favorite tracks off of the show including "Any Kind of Guy", "Music Sounds Better with U", "Famous", and "Boyfriend".

The band has three studio records namely BTR, Elevate, and 24/Seven. When the TV show ended in 2013, they continued touring until 2014, then went on an indefinite hiatus up until their recent comeback surprise. In December of 2021, they performed reunion performances, then released their first single since 2013, "Call It Like I See It".

In February 2022, they dropped a new single "Not Giving You Up", taking fans back to the boys' heart-stealing magic.

“Not only are we excited to be sharing new music with you this week, but we’ve been holding onto this secret for over two years and now it’s official, “We are going back on tour!" says BTR.

Surely, fans are stoked to see the boys make their big comeback live on stage. Even though years have passed and fans have grown, they can't get enough of BTR's energy, choreography, and heart-fluttering tracks that audiences all over the world fell in love with. Maybe forever does exist… So, book your tickets now and catch BTR on the Forever Tour!