Why Don't We [CANCELLED] Tickets

The cheeky boys who've got 'big plans are finally back on the road to greet their fans with some 'eight letters they've always been dying to say. Why Don't We is back on the road, preparing to have a good time at The Good Times Only Tour, meeting their fans, performing their best hits, and serving new tracks from their latest album "The Good Times and the Bad Ones" live on stage. As music makes its return to concert venues across the country, Why Don't We is in it to make a live stage comeback on this much-awaited set of live shows. The boys behind hit tracks "What Am I", "Trust Fund Baby", and "8 Letters" promise only good times with fans on this new tour. Hop in for a good time with Why Don't We at Bank of NH Pavilion on Tuesday, July 5th, 2022 by booking your tickets now! 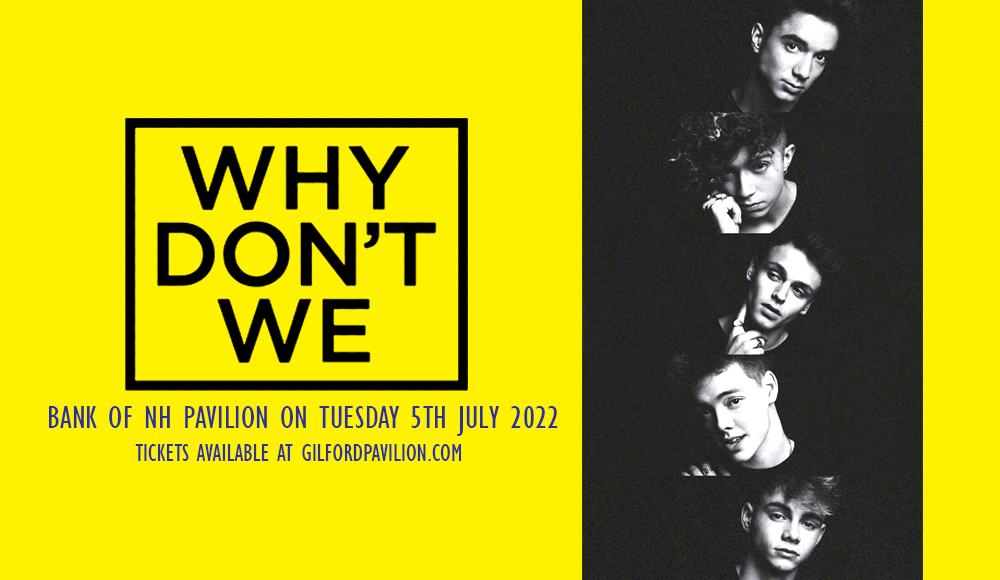 Formed in 2016, members Jack Avery, Corbyn Besson, Zach Herron, Jonah Marais, and Daniel Seavey came together in Los Angeles, and started touring upon the release of their first EP "Only the Beginning". Up until 2018, the band continued to tour and release a slew of EPs before their big album debut. The release of their debut record "8 Letters" marked the band's breakout success, propelling them to reach the global scene. Its singles "Trust Fund Baby" and "8 Letters" helped the band reach a wider audience across the globe.

From struggling to say those 'eight letters to an apple of the eye, the boys themselves received massive amounts of 'eight letters of love from fans worldwide. With a soaring momentum from their major debut release hitting the top ten in the Billboard 200, Why Don't We dropped a series of new singles in 2019. They kicked it off with "Big Plans" – indeed, the band had big plans for the next few months and years to come. They blessed 2019 with several new singles including "I Still Do", "What Am I", "Cold In LA", and "I Don't Belong in This Club" with Macklemore.

After closing the year with "Chills", the boys took a nine-month break, preparing big surprises for their fans along the way. By September of 2020, they took the world by storm with a comeback single "Fallin' (Adrenaline)" – the lead single of "The Good Times and the Bad Ones". Their second album came out in January of 2021, taking the top third spot in the Billboard 200 – their highest record so far.

Bright days and good times are definitely ahead of Why Don't We as they continue to charm and capture the hearts of listeners across the world. They recently dropped their newest single "Don't Wake Me Up" with Jonas Blue – where they sing lyrics longing for certainty in love singing "'no matter what the odds, I’m gonna try."

Only good times are in store for fans as the band prepares to meet their fans in this exciting tour. It's your chance to scream those eight letters out loud at The Good Times Only Tour as Why Don't We hits the stage at Bank of NH Pavilion in the tour roster. So, don't miss out and grab your tickets now!